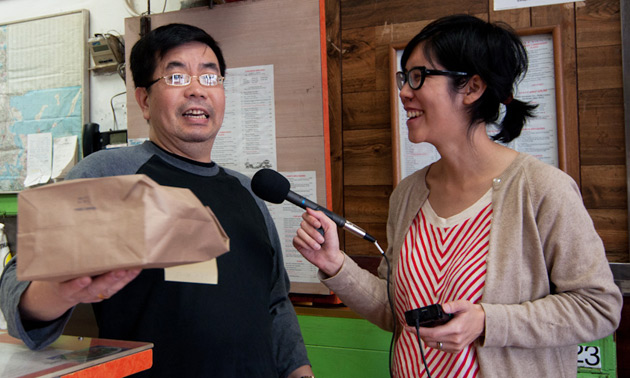 It’s a rainy night, you get home from work late, and nothing is prepared for dinner. Where do you turn? Maybe you reach for the phone and call your neighborhood Chinese takeout. And voilà! Thirty minutes later, your fingers are greasy from crispy egg rolls and you’re dousing your pork fried rice in duck sauce (or maybe that’s just us).

But do you know the family who owns the restaurant and the person who cooked your dinner? Planet Takeout, a collaboration between public radio reporter Val Wang, Boston public media station WGBH, and Zeega, has shared some of the stories behind the 10,000 takeouts across the U.S. Although based in Boston, Massachusetts, Planet Takeout gathered and shared stories about local Chinese takeouts from listeners across the country.

When asked why she was interested in exploring the stories behind Chinese takeouts, Wang said, “I am really fascinated by these takeouts. When I was in New York it seemed like there was one in every neighborhood. Everyone who goes to a specific takeout has these relationships with the people who own the restaurants and their role in the area.”

Explore the stories, watch the videos, and listen to the interviews on Planet Takeout’s interactive website. And maybe share your own!

Planet Takeout is part of Localore, a nationwide public media production by The Association of Independents in Radio (AIR) focused on innovative and interactive local storytelling. Twelve independent reporters led year-long multimedia projects at 10 public radio and TV stations across the country, delving into their local communities via broadcast, digital, and street media.

Localore is supported by the Corporation for Public Broadcasting, the MacArthur Foundation, the Wyncote Foundation and the National Endowment for the Arts.