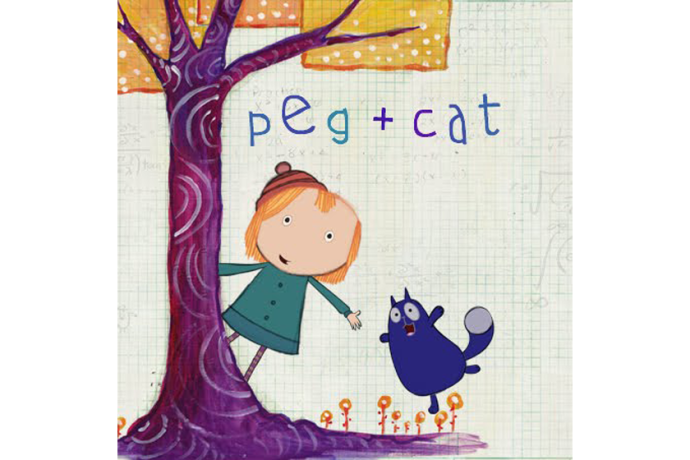 What does Peg + Cat equal? It equals girls and boys who are good at math! PBS Kids, public TV’s preschool programming line up, just added Peg + Cat, a new cartoon to help all early learners understand and do well at math.

When the program premiered last Monday, October 7, viewers met Peg, a curious and spunky preschooler, and her best friend Cat, a blue talking cat. Together, they go on adventures in different places, like a farm and a bedroom, and tackle problems they face along the way using math skills.The show was created by Billy Aaronson and Jennifer Oxley and produced by the Fred Rogers Company.

The program focuses on building kids math skills and bigger math concepts that will help them understand math at any level from kindergarten to calculus. In “The Chicken Problem,”Peg, Cat and Pig work together to put 100 loose chickens back into their coop by collecting the chickens in groups of 10, which teaches size correspondence and counting. In “The Messy Room Problem,” Peg focuses on relative size and geometry as she puts away different shapes. These are just two examples of the many math concepts the show tackles. Peg looks at these problems like challenges, not just numbers, which makes math concepts less scary for kids.

Peg + Cat also teaches kids important life skills, like teamwork and resilience. Peg often works with her friends to solve problems. She solves problems by reviewing what went wrong and how it can be fixed. Since she might not solve the problem the first time, viewers can see that mistakes are okay as long as you keep trying new ways to find the solution.

In addition to being cute, the show is entertaining, funny and musical! Peg approaches math problems and concepts with enthusiasm. Each episode also features an original song.

Most importantly, Peg + Cat is addressing a national educational need. Recent studies show that more than half of the nation’s kids are performing below proficient levels in math by the 4th grade. Another study recommended that the best way to introduce kids to these concepts is in an informal setting, like educational television and other educational media resources.

And that’s exactly what PBS Kids accomplishes with Peg + Cat. In addition to the show, kids and parents can visit the Peg + Cat website to play educational games. A mobile app and other multimedia features have also been released to complement the show.

I’d say public TV’s commitment to address a national need with a wide variety of cutting-edge educational programming and multimedia resources, like Peg + Cat, is well worth the price tag of $1.35 per American. What do you think?