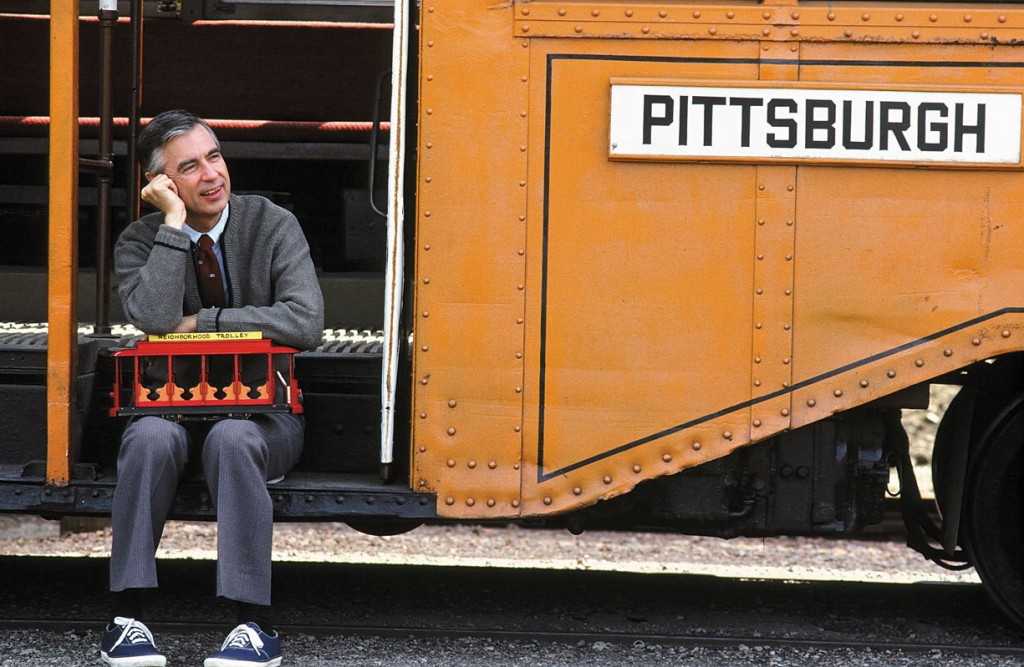 We all have our gripes. I hate that when I can’t sleep, I reach for my smartphone. The gentle, soft-spoken man, who would revolutionize children’s educational programming, had a major gripe. He hated TV. So, what did he do? He changed it.

Fred Rogers of Mister Rogers’ Neighborhood would have been 86 years old today. In celebration of his birthday, we honor our favorite neighbor’s life work and lasting legacy.

I recently watched episodes of Mister Rogers’ Neighborhood on the PBS KIDS website. I didn’t know how I was going to react to the program. I adored it as a child but I hadn’t revisited it since.

As the xylophone strikes the opening note, I’m transported back in time. Mister Rogers opens the door. He warmly receives me into his home as he swaps his coat for a homemade sweater, and his loafers for sneakers. When he speaks, I feel like he’s only speaking to me. He tackles tough topics from sharing to when friends fight to divorce in any anything-but-tough manner. And he speaks to me like an adult. He’s genuine. He introduces me to people in his community, and I feel oddly close to them. They’re my neighbors, too. I visit the Neighborhood of Make-Believe via the red and yellow model electric trolley. All of these characters teach me valuable lessons. As I watch I feel calm, understood, special and loved.

The life lessons Fred Rogers taught us are timeless and resonate with young and old. It’s no surprise that Mister Rogers continues to be cherished by children, adults, families and professionals. His impact is so meaningful and enduring because he developed strong skills in many fields – music composition, TV production, puppetry, ministry and lifelong studies in child development. He was able to tie all of these skills together to explain difficult child development theories into life lessons for all.

His work went beyond the TV screen. On a PBS tribute page, a deeply personal story about Fred Rogers is shared. A father tells the story of the tragic loss of his seven year old daughter, who loved Fred Rogers. Following her death, the father sent a thank you note to Rogers for having been part of his daughter’s neighborhood and contributing to her self-esteem. Shortly after, Fred Rogers called the father, and quickly developed a lasting personal relationship with the family, both visiting and writing the family. The father said he became even more “Mister Rogers” in person then on TV.

He was also a public media protector. In 1969, Mister Rogers went to Washington to fight against proposed public broadcasting funding cuts. His passionate plea to Congress, gave no-nonsense Senator John O. Pastore goose bumps. And his testimony led to the restoration of full funding for public broadcasting.

His impact was so powerful that he later received the Presidential Medal of Freedom, the United States’ highest civilian honor, from President George W. Bush for his contributions to children’s education. In his remarks the President stated, “Fred Rogers has proven that television can soothe the soul and nurture the spirit and teach the very young”.

The Fred Rogers Company also continues to advance his philosophy and values by providing meaningful children’s programming that continues to promote social and emotional learning as well as new ways of learning. A new generation of children and families, have met or will meet Daniel Tiger, a character from Mister Rogers’ Neighborhood, in Daniel Tiger’s Neighborhood, produced by the Company and aired on PBS stations. Daniel Tiger’s Neighborhood recently ranked in the top 10 of all children’s programs. Last month, it was the top program for children under three.

Both of these institution’s work ensure that Mister Rogers’ legacy will live on.

Today, as we celebrate Mister Rogers’ birthday, let’s think about the silly or maybe not so silly things we hate, and instead of hating them – let’s think about changing them for the better. Or let’s simply reflect on his timeless wisdom and work to be a better neighbor.

How has Mister Rogers inspired you or impacted your life? Tell us in the comments below!