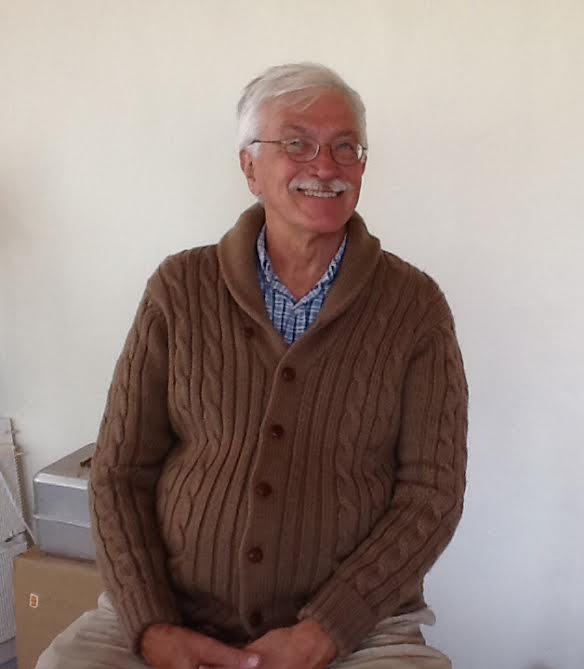 Thursday, May 1 marked the 45th anniversary of Mister Rogers‘ heartfelt testimony to Congress to protect public media. We honored this special day, our very special neighbor and our public media stations by hosting a photo contest. Public media supporters snapped selfies in Mister Rogers’ style sweaters and shared why public media matters to them on our website, and Facebook and Twitter with the hashtag #sweaters4pubmedia.

Your entries were inspiring. We received numerous photos, videos, testimonials, poems and thoughtful expressions of support for Mister Rogers and the stations that introduced you to him and many other important public media programs. As a result, you made picking our favorites really hard! To view more of the photo submissions, visit our Facebook album, Twitter feed or check out our new testimonials on our website. Here are some of our favorites, in no particular order:

Not one but two generations of Mister Rogers and public media fans rockin’ the red! Can you spot a familiar face in the background? 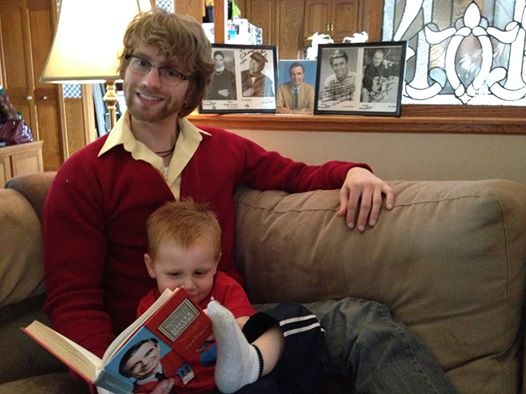 Shawn and his son enjoying a Mister Rogers’ book.

It’s all in the name. We couldn’t resist. 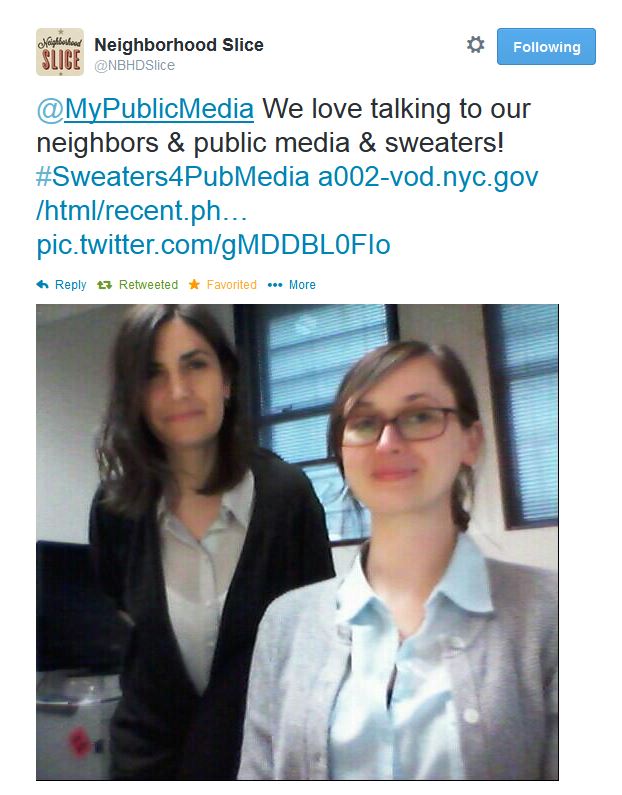 Gals from Neighborhood Slide in their finest Mister Rogers sweaters.

Janak has been a fan of his local station, Illinois Public Media, since his days as a student in the 1970s. His kids grew up on local PBS shows. In his retirement, he relies on NPR and PBS for real in-depth news. He thinks it’s essential for the survival of a vibrant democracy. We agree and love his bow-tie & sweater getup. 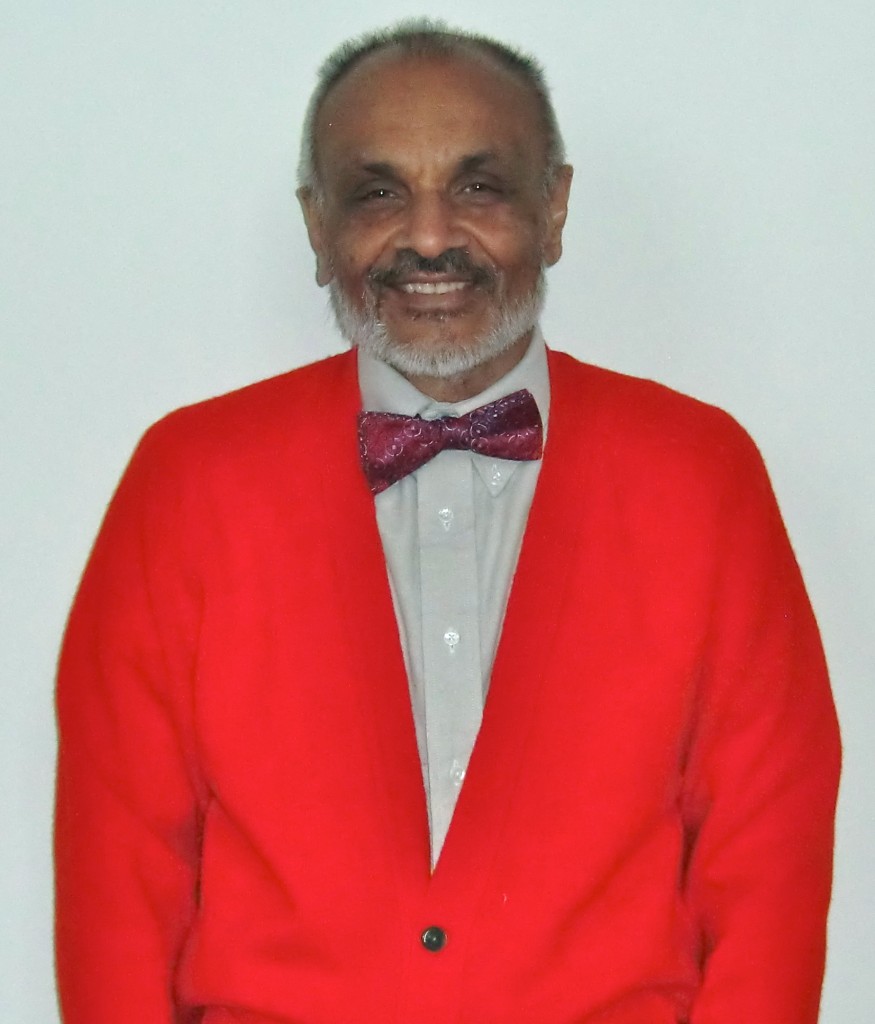 Can we say cutie patootie? Little Leila can’t talk, yet. If she could, she would say, “I want to see all the cool, educational, noncommercial TV shows my MeMe grew up on because I want to grow up just as smart as her! Keep public media for my generation, please!” 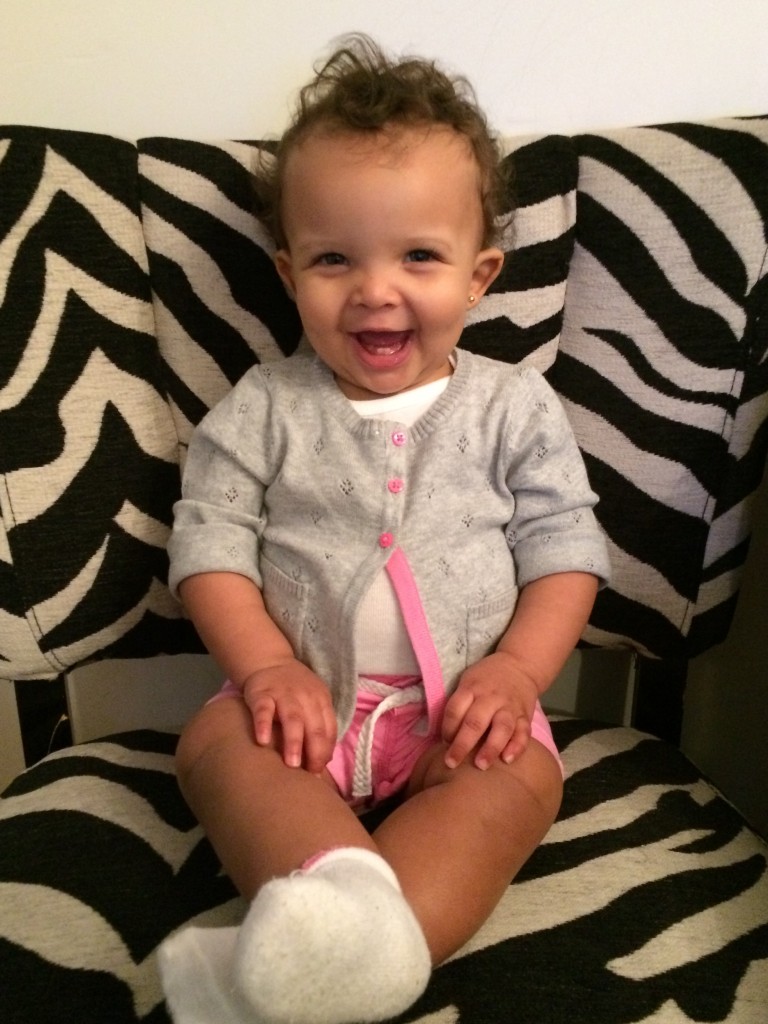 Leila being cute as can be in a gray and pink sweater number.

It’s a wide world,
And we need a trusted guide.

From Mister Rogers to Ms. Ifill and Ms. Totenberg,
Public Media have been there at my side. 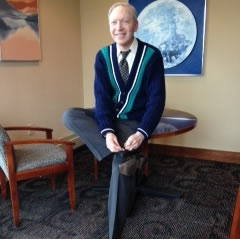 Veronica from Colorado grew up watching PBS! It introduced her to Jazz and American history. She felt it was more engaging than the classroom with its award winning documentaries. I mean, who doesn’t love Ken Burns? 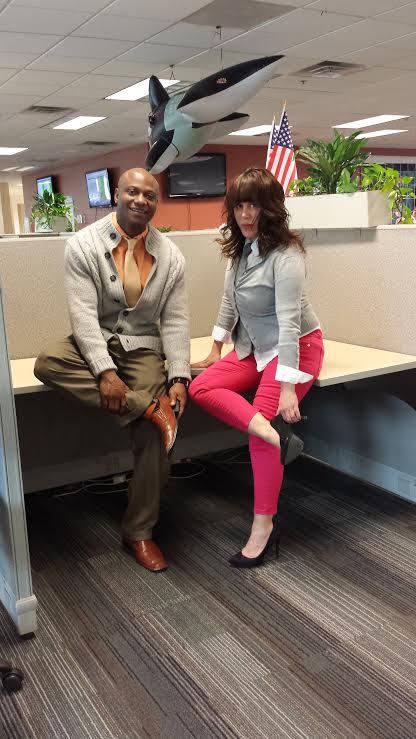 Veronica and a friend kick off their shoes.

Karen from Nebraska is grateful to Mister Roger and her local station, Prairie Public Broadcasting, for enriching her and her family’s lives:

“Growing up in a rural state, we didn’t have wide opportunities for concert performances. So we listened and watched, learned and loved the exposure to the arts. Public media has been a safe harbor for our daughter as she grew. In public media children’s programs, we knew she could learn about the world in interesting ways through caring people. Thank you, Mister Rogers, for taking us on field trips to learn how things worked, and for providing us caregivers with messages we can share with children that are still relevant today. Thank you, Mister Rogers and public media, for educating, informing and inspiring our lives.” 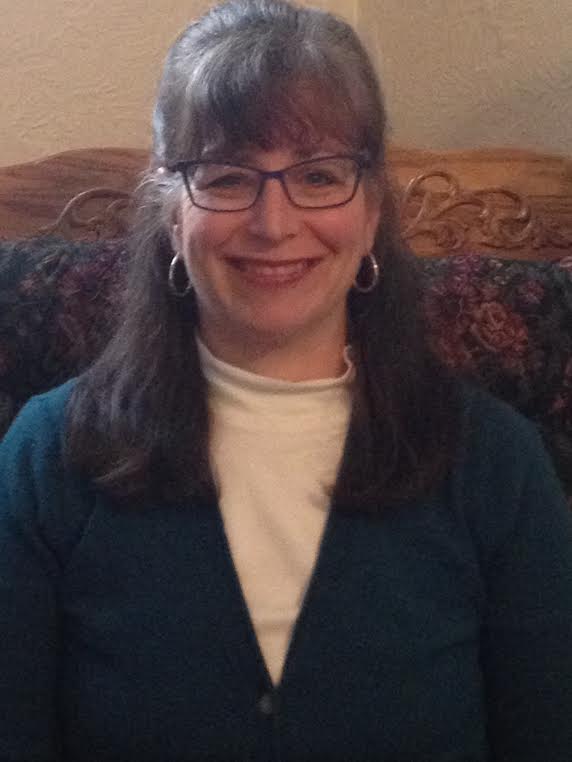 Karen with a big smile and a blue sweater.

When you work in public media, you live for a good Throwback Thursday picture, especially if it involves the real Mister Rogers. Thanks, Phil from WTIU in Indiana for sharing this gem with us. 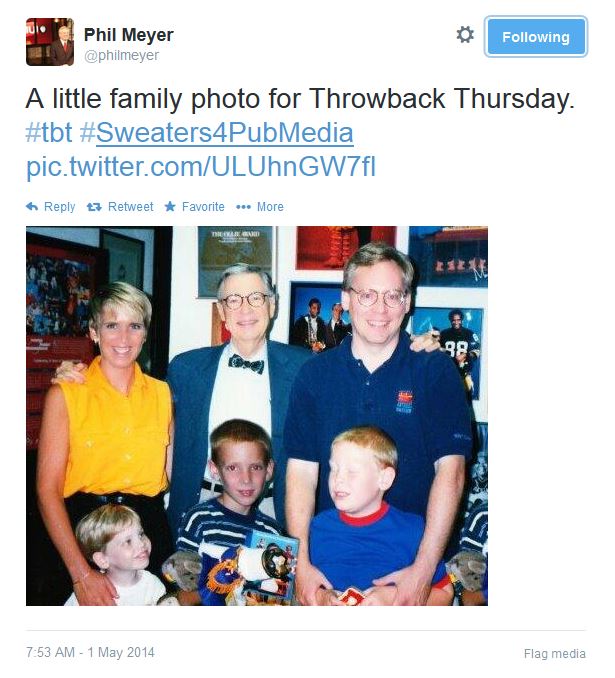 Phil, General Manager of public TV station WTIU (Bloomington, IN), with Mister Rogers and his family.

Ashley from Washington, D.C. watched MacNeil Lehrer NewsHour and Washington Week in Review as a kid with her dad. We bet she doesn’t miss a beat. 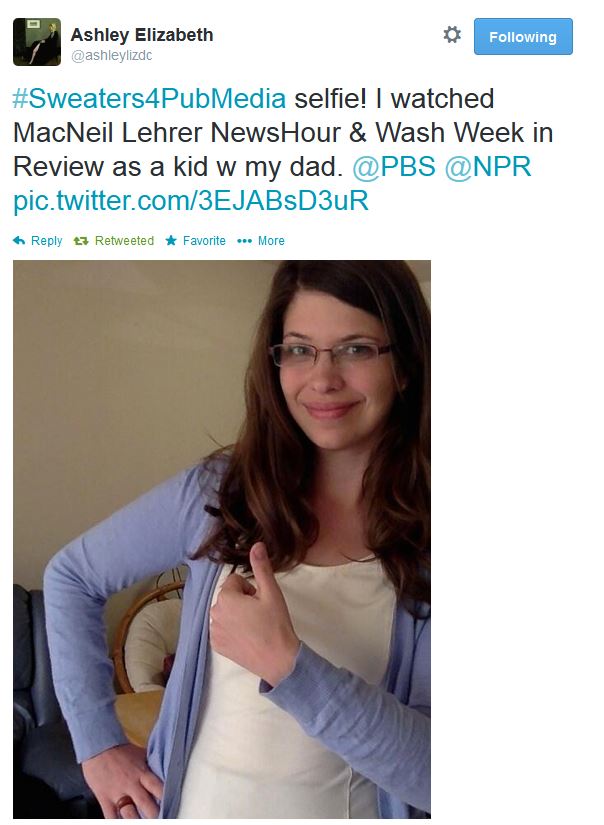 Ashley is looking lovely in lavender.

George and his wife Mary have been lifelong public media fans. (Mary took this great picture!) Before they moved to South Florida, they have always tuned into their local stations in the states they lived. Now, they watch WPBT and WLRN, and listen to WLRN and WKCP. They both remember Mister Rogers from their childhoods. Isn’t that sweet? 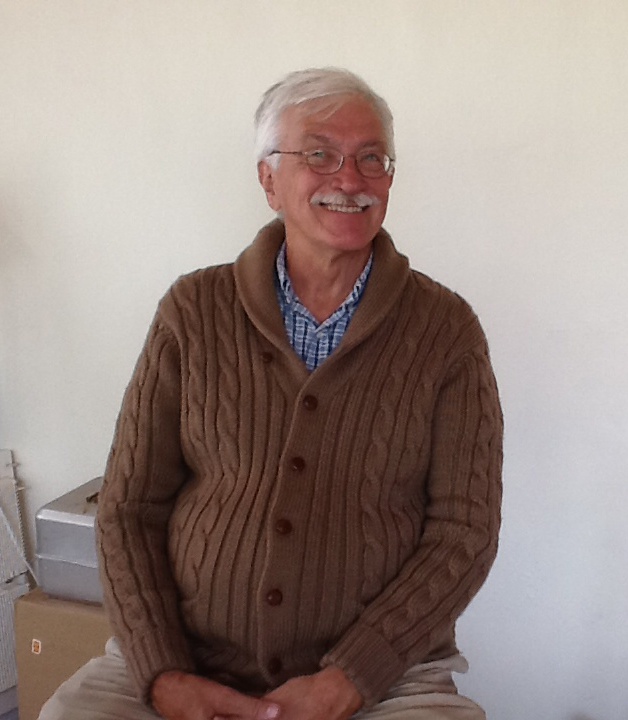 George showing his public media pride in his brown button down sweater.

Roy from California shared how Mister Rogers influenced his life and career.

“I dressed up as Mister Rogers for Halloween, and my friend Carrie helped me to make King Friday XIII out of felt, a foam ball, a wooden dowel and gold pipe cleaners. I loved watching Mister Rogers growing up, but it wasn’t until I was older that I realized how much influence he had on my life. I now work at Los Angeles NPR station KPCC, and I believe that my early love and exposure to public broadcasting helped determine my career path. Much credit also goes out to my parents, who passed their enthusiasm for public broadcasting on to me and instilled a love of learning. Public media is a unique and essential resource that connects me to the world, and its quality content keeps me informed, engaged and enlightened.” 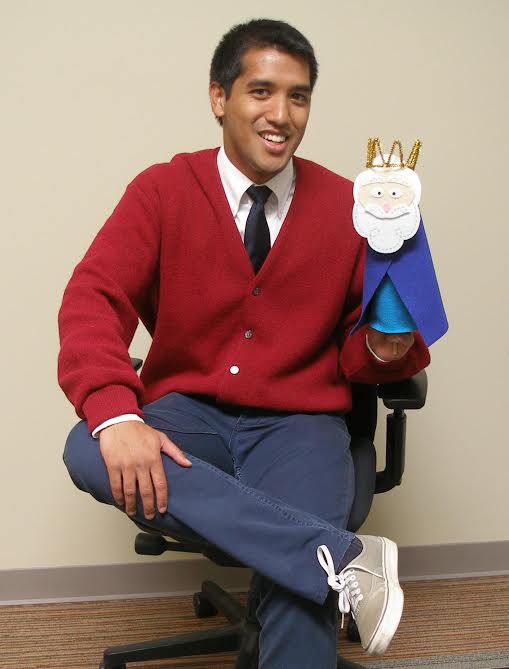 At our headquarters in Washington, D.C., we had a blast receiving your pictures, learning why public media matters to you, and engaging with public media supporters on social media. Here are some of our favorite tweets.

We bet Mister Rogers would have liked Lou’s sweater but he may have some tips to share with him on the importance of kindness. 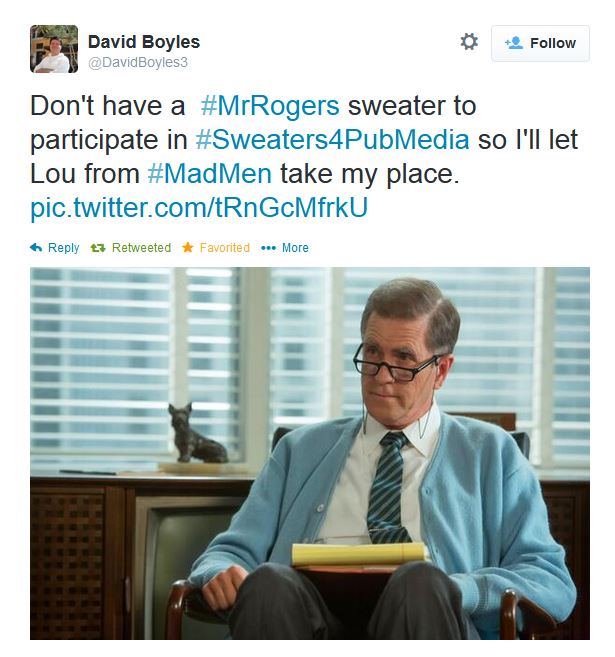 Lou Avery in an episode of Mad Men.

Video: Students covering one of the “most historic days in public media.” 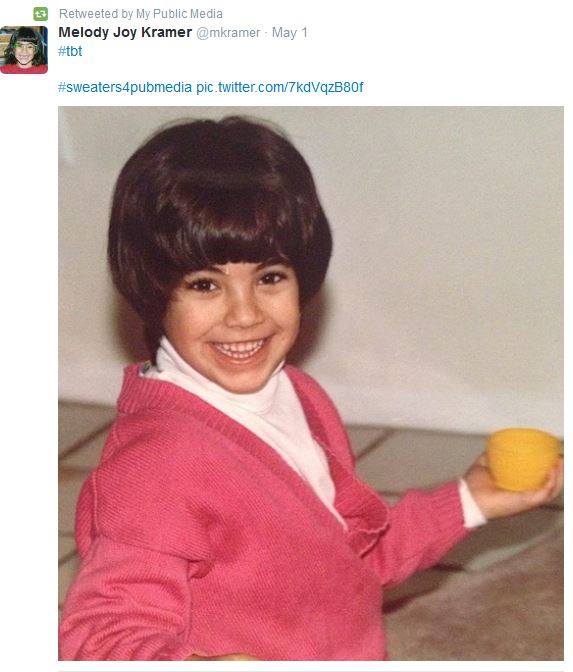 Lastly, a big thanks to the local public media stations that first invited us into their home, gave us a ride to the Neighborhood of Make-Believe, and continue to take us to new, exciting places everyday.

Video by Protect My Public Media