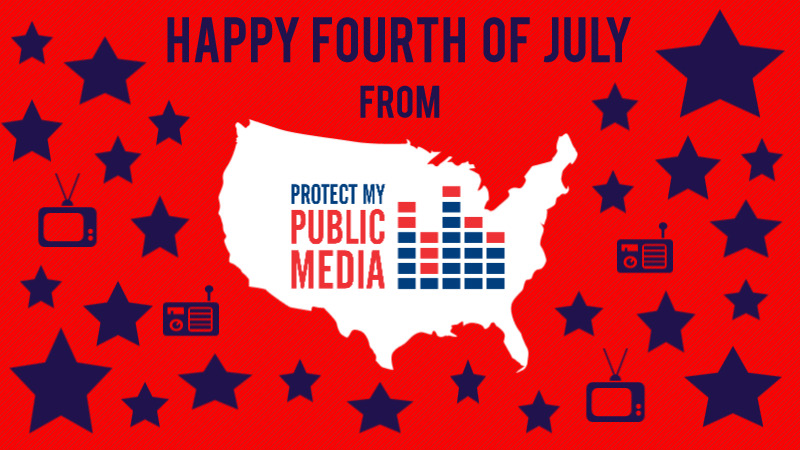 Today, the Fourth of July, we put on our red, white and blue best in honor of our country’s adoption of the Declaration of Independence. We attend patriotic parades and sing traditional American songs. Hot dogs and hamburgers sizzle on backyard grills. Vibrant, sparkling fireworks burst into the night sky.

Today, we’re united in celebration of who we are – Americans – and our diverse history, culture, traditions and institutions that set us apart from the rest of the world. One of these critical institutions that make our nation great is our public media system. Beyond our country’s birthday, public media stations are celebrating our history, culture and traditions, strengthening our democracy and bringing our country together.

Public media stations convene community voices. Public radio and television stations are local nonprofit organizations that are committed to the communities they serve. Stations produce local programs that educate and introduce generations of citizens to the events and people that have shaped and are shaping their own backyards. For instance in Wyoming, Wyoming PBS offers programs like: Wyoming Perspectives, Farm to Fork Wyoming, Wyoming Chronicle, Main Street, Wyoming, that tell Wyoming’s stories and viewpoints.

StoryCorps travels thousands of miles every year and partners with radio stations across the United States to record local voices and their stories. The stories are archived in the American Folklife Center at the Library of Congress and shared every Friday on NPR‘s Morning Edition.

From American roots music like bluegrass and folk to jazz and blues, public media stations are conserving and sharing our nation’s musical beginnings. Music in America would sound very different without public radio. They celebrate traditional music genres like classical and jazz, and partner with local music organizations to take these art forms to the next level. Public radio offers one of the nation’s only radio programs dedicated to traditional Native American music on KSUT Southern Ute Tribal Radio. In Western North Carolina, a flagship bluegrass station,WNCW, honors and promotes the region’s rich bluegrass history, and this is just a small portion of the music programming you will find at public radio stations across the country. They also support their local economies, including music venues, organizations, bands, and numerous other small businesses.

Public television and radio stations are committed to telling America’s story. Public media is the home of renowned programs American Experience, American Masters, Frontline, This American Life and A Prairie Home Companion. Public media is also the home of award winning documentary filmmaker Ken Burns, who has covered a wide range of historical events from The Central Park Five and Jazz to The Dust Bowl and the women’s suffrage movement. These programs thoughtfully and meticulously document our nation’s past and our present.

Public media stations are strengthening our democracy. Public radio and television stations are a vital source of the best news, local and educational programming designed to enhance the quality of life of our local communities. Public media’s top of the line news coverage with programs like Morning Edition and the PBS NewsHour encourages the free flow of ideas and debate, which help us participate in the political process as informed citizens. Public media’s educational programs like Sesame Street and Arthur make certain our children will be on track to become good citizens.

Public media stations bring our country together. For three decades, public television has brought millions of Americans together in celebration of the birth of our great nation with A Capitol Fourth. This star-studded extravaganza allows viewers from throughout the country to experience the Fourth of July in the nation’s Capital. This year, two-time Emmy Award-winning television personality Tom Bergeron, along with a cast of iconic performers, will headline the event. Click here for local listings on your public television station.

Happy 239th birthday, America. Today, we’re grateful to our founding fathers who gave us our independence, our life, our liberty, our pursuit of happiness and the ability to have public airwaves dedicated for and to the people of the United States of America.