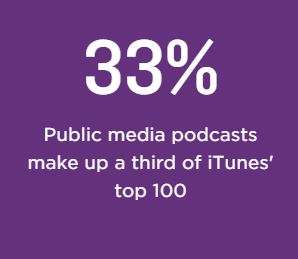 The rapidly increasing popularity of podcasts has provided public media with an unprecedented opportunity to reach new listeners. Today, audiences can choose to consume content covering almost any subject imaginable online, on mobile and on tablet devices. Public media outlets have long been innovators in the field of podcasting and have attracted audiences accordingly: per NPR, 33% of iTunes’ Top 100 podcasts were produced by public media. Local public radio stations have used the growing interest in podcasts to introduce new listeners to public media and reach more people than ever before. Now, users only need an internet connection to experience the diverse array of thought-provoking, original programming offered by local public media stations throughout the country. Podcasts in particular can provide an intimate look at many different communities and cultures. 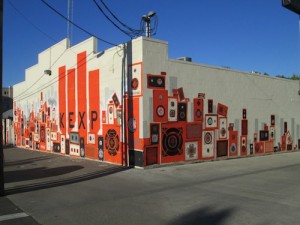 Driven by listener support, public media stations are using local programming to make a national impact. These outlets offer content that can’t be found anywhere else. KEXP in Seattle reaches over 200,000 listeners every week, thanks in large part to their carefully curated streaming music programming and podcasts. On the east coast, North Carolina’s WUNC served as the launching pad for Criminal, a runaway hit that has captured the attention of Serial fans. The podcast, which shares “stories of people who’ve done wrong, been wronged, or gotten caught somewhere in the middle” explores true crime stories that range from comical to severe. Flagship public radio stations such as KCRW in Los Angeles and WNYC in New York continue to produce groundbreaking content. WNYC even recently launched its own podcast-centric division. Last year, we released our own list of under-the-radar gems that public media devotees are sure to love.

The Localore initiative by the Association of Independents in Radio (AIR) is continuing this trend. Launched in 2010, Localore highlights local communities through public media and shares their stories nationwide. The initiative joins talented independent producers with public media outlets and helps fund new and original content. Previous programming made possible by the Localore project has included shows from WGBH in Boston, WYSO in Ohio’s Miami Valley, and KVNF in Western Colorado. The latest edition of Localore, “Finding America,” seeks to expand the initiative’s reach throughout the country. Anticipated programs include Baltimore: The Rise of Charm City, a study of the “hidden, forgotten allure of Baltimore” from WEAA, and Invisible Nations, an exploration of native tribes produced by Oklahoma State University’s KOSU. Check out the full list of upcoming programs here.

Around the U.S., public media stations continue to embrace cutting-edge digital mediums like streaming radio and podcasting. Do you have a favorite podcast produced by your hometown public media station or an exciting discovery from elsewhere in the country? Feel free to share your finds in the comments below— we’d love to hear about them!