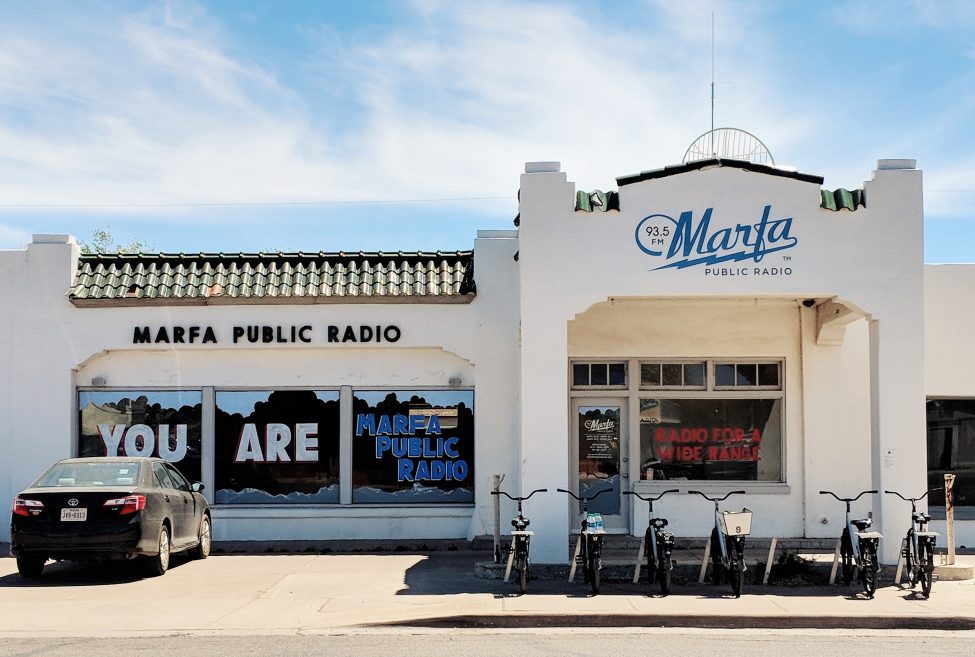 With a majority of Americans and their children continuing to stay home from work and school, public radio has become an essential community service for people looking for music, entertainment, and relief and for local artists whose work is promoted and shared on local public radio stations. From Zoom dances to virtual concerts, and more, we took a look across the United States to highlight some of the initiatives taken on by rural public radio stations to spotlight local artists during this uncertain time.

The focus on local is important to musicians and has an impact on their communities. Since social distancing can feel isolating at times, rural stations have found ways to bring comfort and create togetherness through music.

Marfa Public Radio’s two-hour virtual spring dance party, Dancing on Your Own, created community by inviting their audience into a station Zoom chat where people could listen, dance, and connect with their neighbors. The event offered an escape during lonely and uncertain times.

New Hampshire Public Radio’s  New Hampshire Calling program gives New Hampshirites a platform to share their stories, feelings, and pandemic tricks and tips. The station’s The Folk Show invites listeners to join singalongs to lift the community’s spirits, encouraging participants to “open a window and invite a neighbor to sing along – and to tweet a selfie doing it.”

WFPK, an affiliate of Louisville Public Radio in Kentucky, has also been active in creating a sense of connection between their listeners by referring to every first Wednesday of the month as “Mental Health Day.” From 8:00 a.m. to 6:00 p.m., listeners can call and request songs that give them hope or help them cope. With the pandemic and its social restrictions significantly affecting Americans’ mental health, WPFK hopes to offer relief through music while supporting discussions about mental health and providing local resources to those in need.

As many American workers stayed home due to the Coronavirus pandemic this spring, musicians were also forced to adapt to the new socially distanced economy. Required to cancel tours and other in-person engagements, the COVID-19 crisis has wreaked havoc on the music industry – especially for smaller artists and bands that heavily rely on ticket and merchandise sales from shows to survive.

In the wake of the health crisis, rural public radio stations have stepped up to help mitigate the negative impact on musicians by offering new and expanded music programming. Local public radio stations, with a focus on discovering and promoting local and regional sounds, are incredibly far-reaching, available to around 98% of the country. In addition to being a primary source of news and information, public radio is also a top destination to enjoy free, easily accessible, and locally focused cultural and music programming.

Concerts are a unique opportunity for local musicians to showcase their work. If not touring themselves, when larger bands come into town, regional artists are first to fill the bill. Public radio stations have always been a proponent of their community sounds but have increasingly been finding ways to make up for the lack of live in-person events.

After the cancellation of the Alaskan Folk Festival, Southeast Alaska’s KTOO and its affiliates continued its Red Carpet Concert series on Facebook, to give local performing artists in the festival the ability to perform remotely. Similarly, Homer, Alaska’s KBBI retooled Concert On Your Lawn a new rendition of their Concert On the Lawn a 34-year-old tradition. They revived the series to remotely broadcast both new and archived performances from a mix of state and local acts.

On the opposite coast, Maine Public presented its inaugural Maine Tiny Screen Concerts series earlier this year. The series invited musicians of various genres to perform live over Zoom and bring attention to state musicians, while also offering a comforting music experience for their listeners across Maine.

In addition to these series, stations are also finding ways to promote community performers by expanding their on-air schedule. At Interlochen Public Radio in Northern Michigan, the station collaborated with neighboring WKAR (East Lansing, MI) and WRCJ (Detroit, MI) to co-produce their new Great Lakes Concerts weekly series that broadcasts pre-recorded live performances from local classical ensembles every Monday Night. The series has featured performances from groups such as the Lansing and Jackson Symphony Orchestra and broadcasts to the entire Great Lakes region.

In addition to stations promoting artists’ work on air and online, some stations are also expanding their programming to communicate directly with artists in their communities.

For example, South Dakota Public Broadcasting is covering local arts and music initiatives like the Allied Arts Fund and other organizations that are providing financial assistance to regional artists. The station has also curated their series Artists and COVID-19, which spotlights local artists and musicians to discuss their work and how they’ve been adjusting to COVID-19.

Recently, North Country Public Radio in upstate New York has been interviewing artists on air with their weekly Spring Fever program to hear how local artists have been adapting to the pandemic. Interlochen Public Radio has mirrored this format with their Notes from Home series which invites the region’s classical artists to discuss what it means to teach, perform, and be a musician in a socially-distanced world.

These programs have given communities a unique insight into how artists and their lives have been affected by the health crisis – a crucial platform that many smaller or local artists do not usually have.

With about 60 million people or one in five Americans living in rural areas, public radio is a lifeline to many small communities. Local noncommercial stations are expanding their community service to become an essential arts and culture resource for their listeners.

Decreasing underwriting and sponsorship revenue due to the economic impact of Coronavirus, has created new challenges for rural stations. But they have responded by remaining committed to delivering essential and free programming to their listeners – and even expanding their programming to adapt to the needs of their communities.

If federal funding is cut, rural stations would be the hardest hit. That’s why it’s important to voice your support for federal funding for public media. You can show your support for your local public radio station and the local music economy by asking Congress to support public media’s COVID-19 relief funding request. If passed, funding would help stations continue these critical public services.