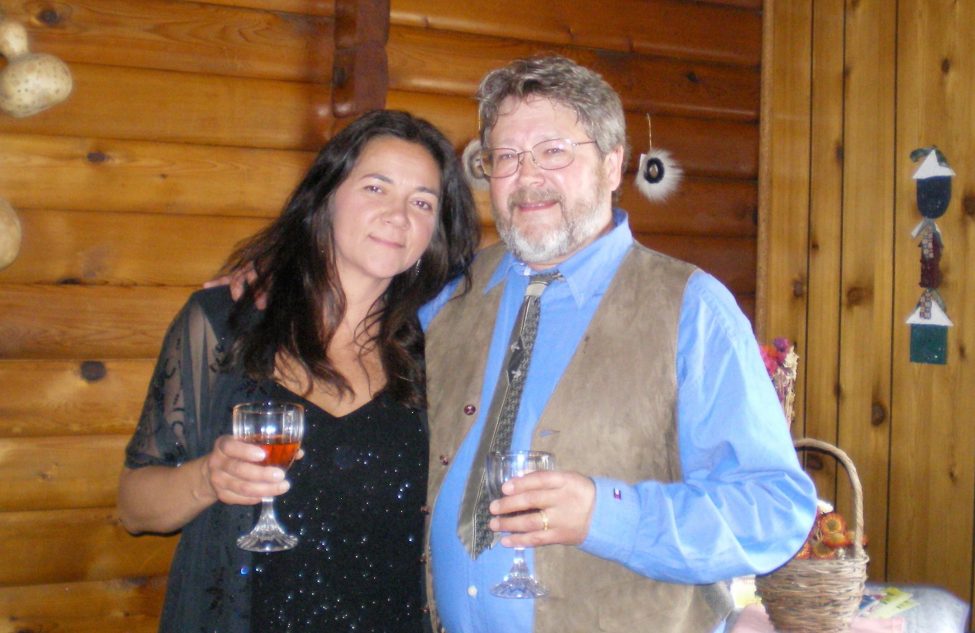 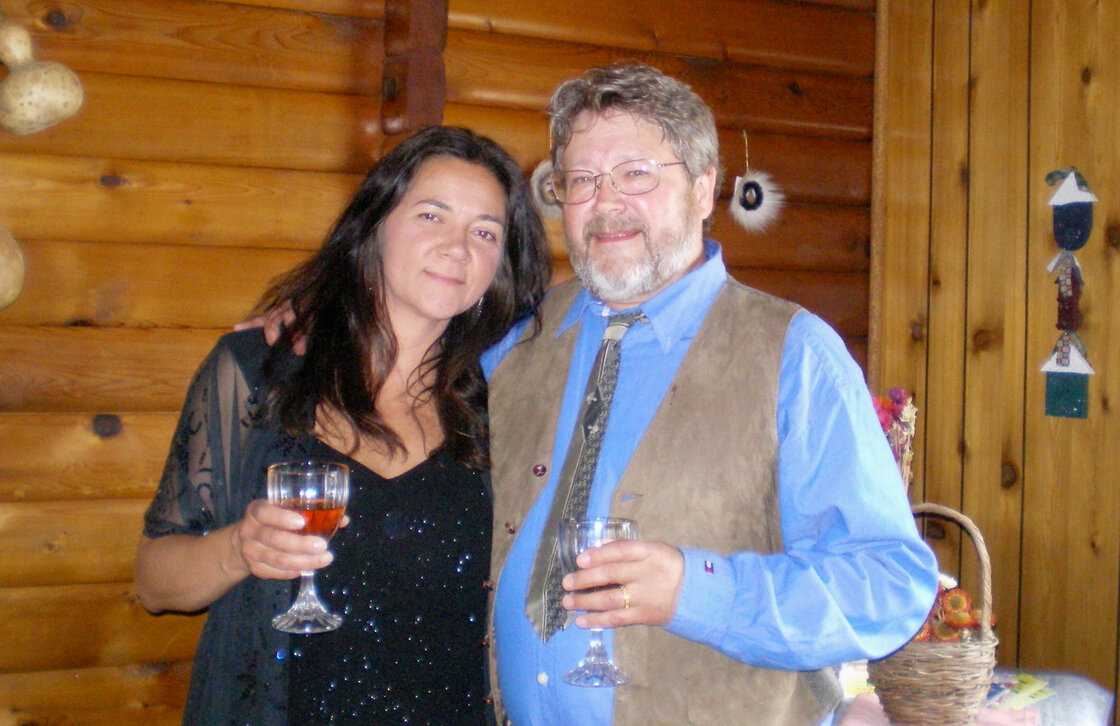 How many texts did you send today? Maybe one or two were similar to these messages:

To the Princess of Bear Cove, Birthdays come and birthdays go – but few like you retain that glow. Happy belated bday from all of us. From Club Humpy

To the Kumquats – don’t forget to pay your land tax – its due today! From the Carrots

To the Bear Cove Harbor Master – Batten down the hatches, tie an anchor on the dog and be safe. From the Geezers in Girdwood

And, these are just a small sample of the messages you’d hear during KBBI‘s daily Bushlines: messages for people without cellphones.

When Dave Anderson, station manager of KBBI, started reading Bushlines on the air 35 years ago, he had no idea it would ultimately change his life and lead him to his future wife.

“I used to read the Bushlines to a woman raising two girls across Cook Inlet in a very remote bush area. They depended heavily on KBBI and our Bushlines and their handle was the Tree House Gang,” Dave fondly recalls. “I read many messages to them over the years and I always had this image of them and thought they lived like Swiss Family Robinson up in a tree.”

Bushlines are personal messages broadcast over the radio from friends and family to people who are living in remote Alaskan areas. People can call KBBI and leave a personal message – they are encouraged to be 25 words or less – for station staff to read for broadcast. Bushlines are played three times a day, seven days a week and depending on the message – they will sometimes air the same Bushline over the course of several days.

Handles like “The Tree House Gang,” are common practice for “Bushliners.” By using an alias, people living in the bush can remain anonymous as they exchange publically-broadcast messages with friends and family that may be personal in nature.

Detricia Hahn relied on the Bushlines for over twenty years while working on trap lines in a mountainous, remote part of Alaska, fifty miles across water from the nearest road or town. She had no access to a cell phone or TV signal, and recalls being off the grid for months at a time, living off the supplies flown in by plane and hauled home and to camps from the beach by her malamute dog-powered sled. Detricia and her two daughters lived in a plastic tent made from visqueen with a large spruce tree growing through the center, and every day, Detricia would turn on her radio to listen to the Bushlines to hear if there were any messages for their family.

“Our battery-operated radio and KBBI out of Homer were a lifesaver for us,” Detricia says of the importance public radio played in their lives while living in such isolation. It allowed them to stay connected to loved ones with personal messages that spanned the gamut, “from ‘Merry Christmas’ to ‘Grandma isn’t doing well’ to ‘we are flying your way and will drop off your mail, meet us at the airstrip at 2:00.'” 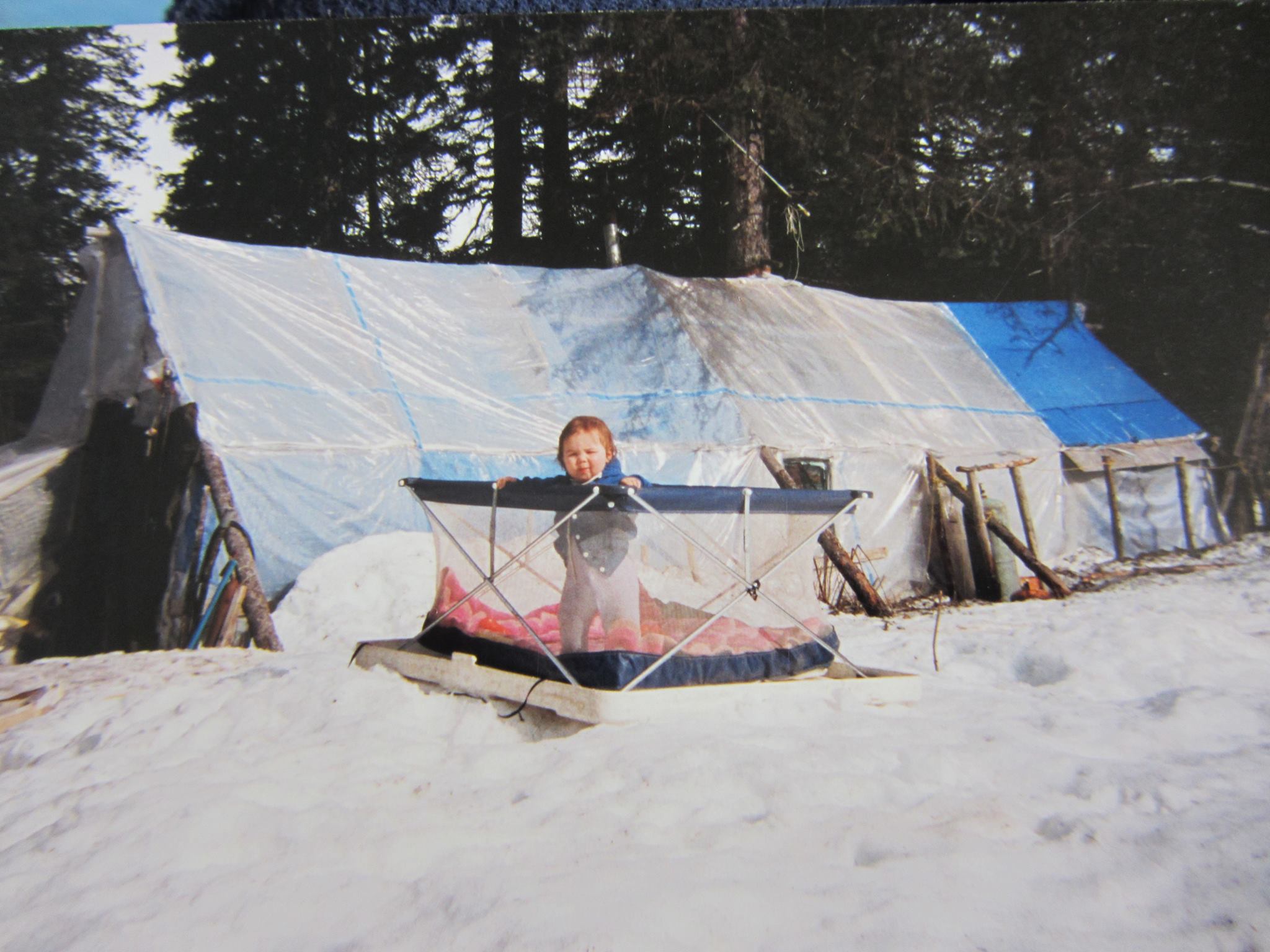 Detricia’s daughter outside of their home: a plastic tent made of visqueen. Photo Credit: Detricia Hahn

She often wondered about the man who read these messages – her lifeline to the outside world.

Dave often wondered about the Tree House Gang, and now laughs when thinking of his imagined vision of how they lived, “I know differently now.”

Eventually, Detricia decided to move to Homer so her daughters could attend the high school in town. After years of mystery, Detricia and Dave finally met in person. Long story short: they’ve been happily married for five years – and it all started with Dave reading the Bushlines to Detricia and her Tree House Gang.

Dave and Detricia are not the only Alaskans who have cultivated relationships through Bushlines.

Kendall Kopecky is a retired fisherman in Bear Cove, where his closet neighbor lives on the other side of a mountain. He has been using the Bushlines since KBBI started broadcasting in 1979. In fact, for this story, Kendall answered a Bushline message Dave sent asking if he would be willing to talk about his Bushline experiences.

Kendall spends a lot of his free time reading, listening to the radio, watching wildlife – like the killer whales that swim by his house at this time of year – and doing puzzles. “I have a lady friend in town that I create and send a puzzle to over the Bushlines every Saturday,” says Kendall. “She then tries to solve it by Sunday and will send her response to me over the Bushlines.”

Kendall talks of other romantic gestures he’s heard come across the Bushlines over the years. “Every summer, one man goes out into the bush to work for the entire summer. Everyone knows when he gets there because the next morning, his wife starts sending him love poems over the Bushline.” Laughing, he continues, “They are very flowery and sweet, which I think is nice but I know that others in the bush find them too syrupy after having to hear a new one every day for three months.”

Detricia knows these same poems well. “Oh yes, we all know about the Rose and Dawson poems. In fact, another couple wrote a love poem this past summer and one of the lines said ‘I love you more than Rose loves Dawson.'”

Even with love poems, isolated living in remote Alaska isn’t always easy — and the Bushlines serve a more serious purpose, including messages about funeral arrangements or natural disaster warnings.

“We were dependent on tides for many reasons, so when the tide book would run out in January and we had no means of obtaining a new one we tuned into KBBI for tide information along with weather reports, and at times, tsunami warnings,” Detricia recalls.

95% of the U.S. population has access to a public radio signal, which plays a pivotal role in times of emergency or disaster. With a unique ability to transmit information when the power grid is down, or to isolated areas that are disconnected by nature, its value cannot be underestimated.

Bushlines can save lives, Dave tells us, recalling a specific instance involving a volcano eruption. A woman was working at a scientific station so remote that Bushlines were her only form of communication. A volcano was ready to erupt very close by and she needed to be evacuated. A Bushline with this information and a rendezvous point was sent out, and she was brought to safety before the volcano erupted.

Stations like KBBI provide essential and critically important public emergency communication services over their airwaves and through their Bushlines. From volcanic eruptions to proclamations of love, Bushlines tie together folks living in remote isolation over the airwaves.

So we have to ask: what would your handle be, and who would you send your first Bushline message to? Or, more simply, how many text messages did you send today?

This blog post was originally published at This Is NPR. 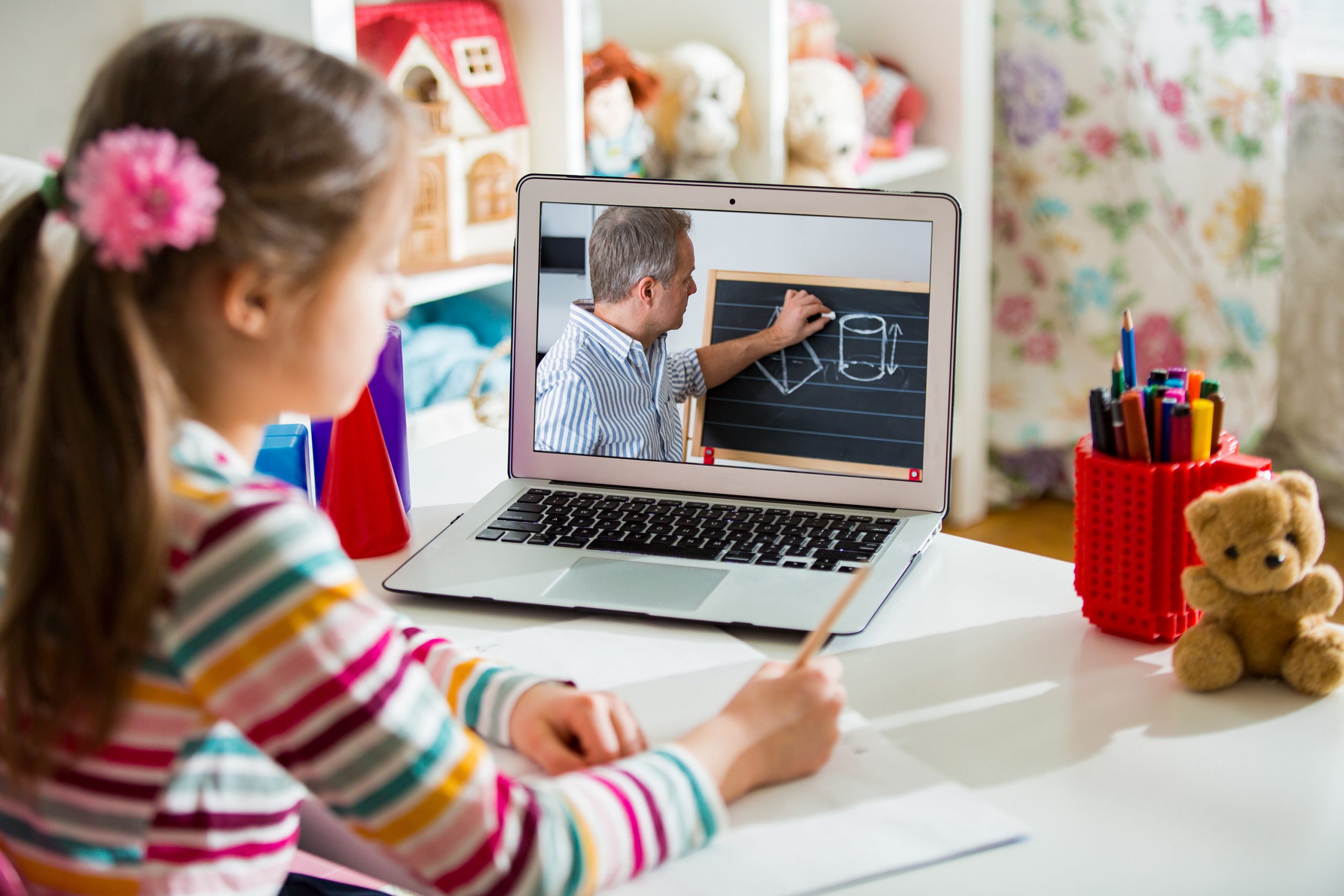