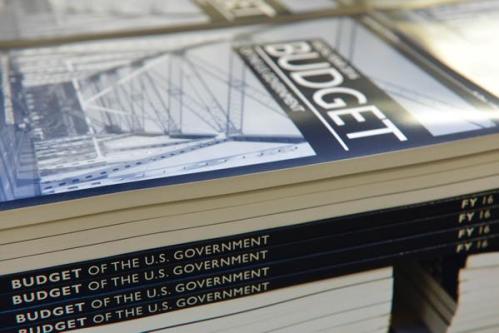 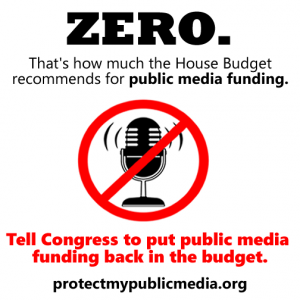 We’ll start with the bad news first. On March 25, 2015, the U.S. House of Representatives passed its annual Budget Resolution, calling for an end to federal funding for public media.

The Good news? The Senate’s version of the budget does NOT call for eliminating public media funding.

So, public media’s in the clear? Not quite.

Public media funding must be included in this final bill.

You can help restore this critical funding today. Email your Members of Congress and urge them to vote to restore public media funding in the final Budget Resolution. You can e-mail them here.

Every e-mail sent to Congress will push us one step closer to our goal of protecting our stations and the programming and services they provide.

What’s at stake? The public airwaves. Without federal funding, the operation of hundreds of public television and radio stations would be in jeopardy. The programs you adore today might not be there tomorrow. And the next generation might never get to know the public TV kids line-up that helped us get ready for school.

And for what? Public media funding is such a small part of the federal budget. In fact, it’s about one hundredth of one percent of the federal budget – around $1.35 per American citizen. Getting rid of this funding wouldn’t impact our national debt, but it would be really bad for our stations.

Please e-mail your Members of Congress in support of public media funding today, and tell your like-minded public media listening and viewing friends, family and neighbors to do the same.